Earlier in the week, one of our readers sent me a meme that was designed with the intent to show how problematic Red Flag Laws could be. As you can see below, it uses the allegations against Supreme Court Justice Brett Kavanaugh to suggest that false claims could be used with Red Flag Laws to take away people’s guns. 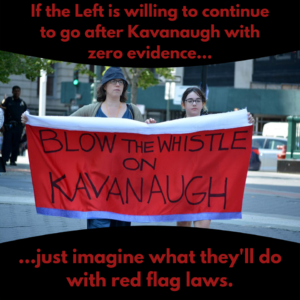 As you’re likely aware, Kavanaugh was thrust into the spotlight once again, late last week, when two New York Times reporters published an essay based off of a book they’ve written on the Supreme Court justice. Included was a new allegation against Kavanaugh of sexual misconduct. As noted by National Review:

“The New York Times set off a firestorm on Saturday evening when it published an essay, adapted from a new book by Times reporters Kate Kelly and Robin Pogrebin, in which the authors report that during Brett Kavanaugh’s freshman year at Yale, a classmate named Max Stier allegedly ‘saw Mr. Kavanaugh with his pants down at a different drunken dorm party, where friends pushed his penis into the hand of a female student.'”

That “firestorm” included calls by nearly every Democratic presidential candidate to impeach Brett Kavanaugh. As time went on though, it became apparent that the book/essay might be more of a political smear job than an example of competent journalism. A day after its publication, editors updated the essay with this note:

“The book reports that the female student declined to be interviewed and friends say that she does not recall the incident. That information has been added to the article.”

I’d say that’s some pretty important “information” to leave out of an original publication.

Over the course of a few days, a clearer picture of classmate Max Stier also came out. As summarized by Real Clear Politics:

“New media reports over the last three days also paint a fuller portrait of Max Stier, the source of the new allegation against Kavanaugh. Stier was not just a well-respected former Yale classmate of Kavanaugh’s who ran a nonpartisan nonprofit in Washington, as the New York Times article first presented him.

“Stier’s path crisscrossed Kavanaugh’s in Washington and he was ironically on the legal defense team of President Clinton during the Monica Lewinsky scandal — working opposite Kavanaugh, who was helping independent counsel Kenneth Starr in the late 1990s.

“Kavanaugh wrote the rationale for impeaching Clinton over alleged perjury and obstruction of justice. Stier, who was working for the law firm Williams & Connolly at the time, co-signed a document ridiculing the removing of the president over ‘vague and nonspecific accusations,’ the Washington Post reported this week.

“A registered Democrat, Stier has a history of donating to Democrats — $250 to the Democratic National Committee in 2000 and $1,000 to Barack Obama’s presidential campaign in 2007.

“But he also had early ties to Republicans: He interned in college for Jim Leach, an Iowa congressman, before attending Yale, where he and Kavanaugh were classmates. After going on to attend law school at Stanford, Stier clerked for Justice David Souter while Kavanaugh clerked for Justice Anthony Kennedy — both of whom were nominated by Republican presidents.

“After his defense role in the Lewinsky scandal, Stier served as a lawyer in the Clinton administration before founding the non-partisan Washington-based Partnership for Public Service, which works to ensure that the federal government attracts the best workforce it can.

“Republicans also point to a possible motive against Kavanaugh: Stier’s wife, D.C. Superior Court Associate Judge Florence Pan, was nominated in 2016 by President Obama to be a U.S. district judge for the District of Columbia. The Senate Judiciary Committee unanimously advanced her nomination, but it lingered in the Republican-controlled Senate and never received a vote. Trump was elected and he nominated someone else.”

These weren’t the only things to come out this week that was problematic for those calling on Kavanaugh to be impeached:

“CBS News was reporting some new, narrative-shifting revelations about the original Christine Blasey Ford sexual assault allegation that sparked the confirmation conflagration last year — that all of four witnesses who were said by Ford to be at the house party where the alleged incident took place are now saying ‘no such party occurred.’

“Leland Keyser, Ford’s close high school friend who was allegedly at the party, was among those saying they thought it never took place, and she made a new charge — that she was pressured by Ford’s allies to toe the line last year when the saga was playing out on the nation’s televisions, lest allegations of her ‘addictions’ as an adult come to light.”

It’s easy to understand why all the impeachment talk fizzled.

So, how does all of this apply to Red Flag Laws? It’s quite simple. Remember, these laws are triggered by accusations that someone poses a risk to themselves or others. A person can literally lose their right to keep and bear arms on the basis of false allegations. Red Flag Laws turn “innocent until proven guilty” on its head. The potential for abuse is significant. As one author put it:

“Today, we want a court judge to do the impossible with Red Flag laws. Your vindictive relative can make a phone call based on a post in social media. You’ll have your firearms confiscated, at no cost to them, but at the cost of tens-of-thousands of dollars to you, or worse. There’ve already been gun owners killed during midnight police raids instigated by a Red Flag complaint. The dead gun owner had no record of violent or criminal behavior.

“Red Flag laws lead to firearms confiscation on the basis of an accusation. Gun owners accused under Red-Flag laws are involved in the legal system before they have any chance to submit facts in front of a judge. That one-sided argument means these laws are designed for abuse.”

Think about it. The most recent allegation against Brett Kavanaugh was made by a Democrat (Max Stier) who worked as legal counsel for President Bill Clinton during the Monica Lewinsky scandal. The man he’s accusing wrote the rationale for Clinton’s impeachment. Not only that, but the nomination for Stier’s wife to be a U.S. district court judge was bumped by Donald Trump after he became president— that same Donald Trump who nominated Kavanaugh for a spot on the Supreme Court.

When we consider all of this, is it unreasonable to question the credibility of the allegations against Justice Kavanaugh? Is it unreasonable to come away from the entire debacle and not think that instead of Christine Blasey Ford, Max Stier, and Brett Kavanaugh as figures in a national story, that some might envision a vindictive ex-girlfriend making false accusations against their gun-owning boyfriend in a local case involving Red Flag Laws? Or how about someone upset with the fact that their snarling little dog got kicked by a hated gun-owning relative? Again, the list of possibilities for abuse, when it comes to Red Flag Laws, is long.

While none of us truly know what happened with Brett Kavanaugh over 35 years ago, skepticism should be expected when accusations are highly questionable and have the appearance of being politically motivated. Justice Kavanaugh doesn’t deserve to be impeached anymore than a gun-owning relative would deserve to have his guns taken away for simply kicking a dog.

No, there’s a lot of things to take away from the political drama surrounding Kavanaugh. One of them is that the aforementioned meme is right— this is an illustration of why we should reject Red Flag Laws.

Note: By the way, Tucker Carlson’s recent piece on the Kavanaugh situation is worth the watch. I’ll post it below.

Trump May Have Just Made Heitkamp’s Defeat a Greater Possibility

For many North Dakotans, the anticipation of President Donald Trump’s visit to a Mandan oil refinery in the Peace Garden State was big. And while the topic of tax reform was expected, there was an unexpected moment that I’m not [read more…]

Congressman Kevin Cramer is just a week away from the voters of North Dakota determining whether or not he’ll be the next U.S. Senator from North Dakota. As you’re aware, Cramer is in a political brawl with incumbent Democratic Senator [read more…]

Today the United States Congress passed legislation that will simultaneously raise the debt ceiling for three months and fund hurricane relief to the tune of $15 billion. This really comes as no surprise. Not only does Washington have a history [read more…]