Rep. Ilhan Omar’s (D – Minnesota) election to the United States House of Representatives in 2018 was nothing short of historic. Consider these facts about the Representative from Minnesota’s 5th Congressional District:

When considering these facts alone, Omar’s story is unique— the sort of stuff that movies are made of and history books never forget. Yet, these things have largely been overshadowed in the seven plus months since November’s election by a variety of headlines relating to the congresswoman from Minnesota. In no order of importance, here are some examples:

Much of this shouldn’t be surprising though. After all, Rep. Omar’s own campaign site shows her as a self-proclaimed “progressive voice”. Her goal — in her own words — is to “achieve a bold, progressive agenda”. And her platform proves that she’s serious about it.

What many North Dakotans may not realize though is that they contributed to Omar’s rise to prominence. How? By subsidizing her education. She graduated from North Dakota State University (NDSU) in 2011. 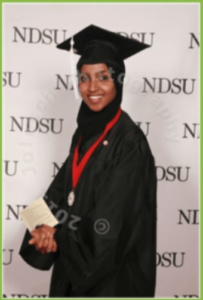 As was reported by KFYR just over two years ago, students attending North Dakota’s eleven public colleges and universities end up having their education “heavily subsidized”. And that includes students from out of state. KFYR’s report came as the result of two proposals (HB 1264 & HB 1265) during the 2017 North Dakota Legislative Session that sought to make changes regarding North Dakota funding out-of-state students. Both proposals failed.

As explained by the bills’ sponsor Rep. Rick Becker (R – District 7) during floor debate on HB 1265, there is currently no limit to the amount of students North Dakota accepts on reciprocity agreements— meaning there’s no limit to the number of out-of-state students that we subsidize. As shown in this 2019 report, Minnesota has had a reciprocity agreement with North Dakota since 1975. And Omar appears to have been a beneficiary of it.

In a nutshell, the tuition charged by our colleges and universities doesn’t reflect the true cost of a student’s education. It’s true that Minnesota issues a “gap” payment to help cover the difference, but as you’ll see in the aforementioned explanation by Rep. Becker, it doesn’t come close to covering it— which still results in the subsidy by North Dakota taxpayers.

Year after year and biennium after biennium, the people of North Dakota are on the hook for giving “free money” to in-state and out-of-state students alike. The fact that we helped pay for the education of a rising progressive political star in the process is just one aspect of a much bigger problem.

It’s past time to rethink the insanity associated with throwing money at higher education in North Dakota.


About T. Arthur Mason 818 Articles
T. Arthur Mason is a native North Dakotan who has spent nearly all of his life in the Peace Garden State. As the third of four children in Western North Dakota, Mason grew to appreciate family and the outdoors. Some of his fondest memories are annual deer hunts with family and friends. In his early teenage years, faith became a central part of T. Arthur Mason's life. He and the majority of his family attend church together on a weekly basis and find this a fulfilling aspect of their lives. Through the influence of his father, T. Arthur Mason became intrigued with politics. As a boy, he attended political events with his father and enjoyed the friendships that resulted as a byproduct of those political associations. As Mason grew older, he became convinced that the quote often attributed to Thomas Jefferson was true, "That government is best which governs least." Today, T. Arthur Mason enjoys time with his wife and children, an occasional hunt, and an increasingly active life on the political scene. This blog is the fulfillment of a dream to design a web site in the realm of politics and to advocate for the principles of Liberty and constitutionally limited government. On behalf of all those that contribute to The Minuteman, we hope you enjoy your time on the site and will share the message with others.

Those who’ve followed The Minuteman for some time know that we’re not fans of government cronyism. We’ve most often discussed it in terms of Renaissance Zones, but those certainly aren’t the only examples. As a West Fargo Pioneer article from [read more…]

Less than two weeks ago, it was reported that Border States Electric CEO Tammy Miller had been in Washington, DC amidst speculation she was considering jumping into the race for U.S. Senate. A source close to the situation now says [read more…]

Bismarck wet plate artist Shane Balkowitsch is no stranger to controversy. According to his own website, Balkowitsch believes that: “Art can be a weapon for change and we artists have the ability to wield it at will.” As someone who [read more…]