In the aftermath of the State Legislature stripping the State Auditor of his authority to initiate performance audits — and Governor Doug Burgum signing off on the power grab — a movement came together under the banner now known as “Audit the Swamp” to refer the issue to North Dakota’s voters. You can see their Facebook page here. 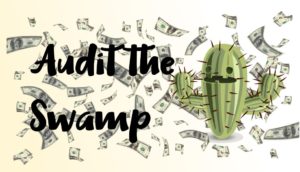 From a source directly involved with the referral effort, I can now tell you that North Dakota’s Secretary of State’s office has officially received the necessary paperwork to not only refer Section 3 of the State Auditor’s bill (Senate Bill 2004), but Audit the Swamp also turned in affidavits to refer legislation that further exempts Legislators’ e-mail from being subject to open records requests (Senate Bill 2221) and Section 5 of the Governor’s budget, which authorizes the $50 million endowment for the Theodore Roosevelt Presidential Library & Museum (Senate Bill 2001).

According to Article III, Section 5 of the North Dakota State Constitution, the necessary signatures to put these issues on the ballot in the next statewide election must be submitted within 90 days of each one being signed by the governor and filed with the Secretary of State’s office. The number of signatures required for each one will be 13,452. Here are the filing dates — from oldest to most recent — for each piece of legislation:

Since the Secretary of State and Attorney General have five to seven business days to draft petition titles, it appears the earliest that Audit the Swamp would begin gathering signatures is June 3rd. The deadlines for signatures to be turned in are:

If you’re interested in being part of the effort to reject these moves by the State Legislature, contact Audit the Swamp.


About T. Arthur Mason 820 Articles
T. Arthur Mason is a native North Dakotan who has spent nearly all of his life in the Peace Garden State. As the third of four children in Western North Dakota, Mason grew to appreciate family and the outdoors. Some of his fondest memories are annual deer hunts with family and friends. In his early teenage years, faith became a central part of T. Arthur Mason's life. He and the majority of his family attend church together on a weekly basis and find this a fulfilling aspect of their lives. Through the influence of his father, T. Arthur Mason became intrigued with politics. As a boy, he attended political events with his father and enjoyed the friendships that resulted as a byproduct of those political associations. As Mason grew older, he became convinced that the quote often attributed to Thomas Jefferson was true, "That government is best which governs least." Today, T. Arthur Mason enjoys time with his wife and children, an occasional hunt, and an increasingly active life on the political scene. This blog is the fulfillment of a dream to design a web site in the realm of politics and to advocate for the principles of Liberty and constitutionally limited government. On behalf of all those that contribute to The Minuteman, we hope you enjoy your time on the site and will share the message with others.

The taxpayers of Mountrail County should be demanding some answers from their county commissioners. The State Auditor’s office released audit findings yesterday showing the county has about $176.8 Million in “available cash balances”. “Having debt-free, available cash balances in the [read more…]

At This Point, Suing Over the Mail-Only Election is Pointless

There’s a number of unhappy people in the aftermath of North Dakota’s Primary Election. Among them are folks who didn’t like mail-only voting. This isn’t altogether surprising, but at this point is it worthy of legal action? Ever since Governor [read more…]

As Expected, the Legislature is Giving Governor Burgum His Library

Last week we broke the news that there were constitutional issues with House Bill 1320. This, of course, was the bill that was completely hijacked in an effort to push funding for the Theodore Roosevelt Presidential Library & Museum through. [read more…]