After North Dakota’s 66th Legislative Session came to a close, we published an article pointing out that balancing North Dakota’s budget doesn’t make you a conservative. This, of course, came in response to Governor Doug Burgum’s office issuing a press release singing the praises of the 2019 Legislative Assembly for “delivering citizens a conservative balanced budget without raising taxes”.

With a 12% increase in spending for the General Fund (over $4.8 Billion), a record overall budget of $14.7 Billion, and a projected ending fund balance of just $44.3 million; we illustrated that the budget wasn’t really conservative after all. Quite simply, there was far more room for cuts. And as Rep. Rick Becker (R – District 7) pointed out in the final moments of the Legislative Session, there was even room for completely eliminating the income tax and property tax.

Yet, in spite of these realities, the NDGOP made their own Burgum-like move last week and posted this to their Facebook page: 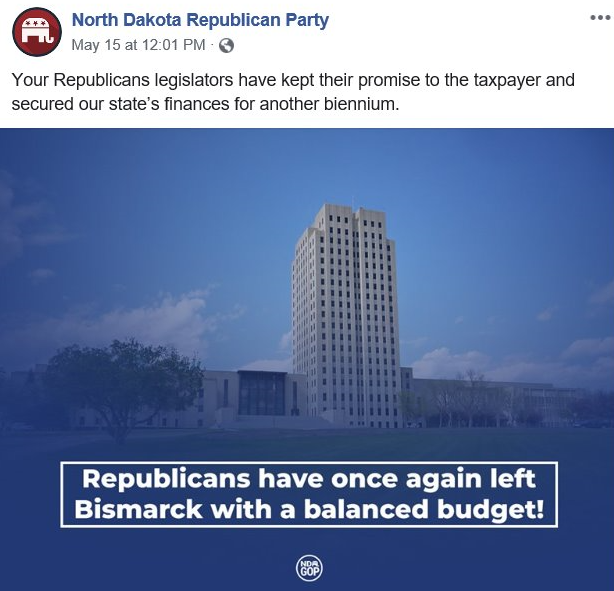 I realize that this looks really good at a glance to those who may not know differently. But one simple fact makes the post ridiculous— the North Dakota Legislature is constitutionally required to leave Bismarck with a balanced budget. That’s right. Republican or Democrat, it makes no difference. The budget must be balanced.

I find it troubling when they claim that, “Your Republicans legislators have kept their promise to the taxpayer and secured our state’s finances for another biennium.” Has North Dakota’s Republican Party honestly decided that securing the “state’s finances” is the way for Republican legislators to keep their promise to taxpayers? That seems backwards to me. I thought the Republican Party stood for limiting the role of government so that taxpayers have more money in their pockets? At least that’s what the NDGOP’s own platform seems to indicate:

“Individuals, families and the government should be responsible in their spending. Taxpayers expect the government to be efficient and avoid waste with their money. The State should only collect taxes to fund legitimate government functions. Government taxes and fees should be limited to essential, inherently-governmental functions and not for the forced redistribution of wealth, or disproportionate advantages for targeted interest groups.”

But then again, some folks — a certain “conservative” radio talk show host in particular — seem to view the platform as some sort of “utopian” idea. I wrote about that recently when I explained why RINO’s don’t like the Bastiat Caucus. So much for that part of the platform known as “Legislative Integrity”:

“Legislators should lead through personal moral integrity, and should consider this Platform responsibly before supporting or opposing legislation.”

Look, if some Republicans want to defend what the majority of the 2019 Legislative Assembly did in terms of spending and a record budget, fine. That’s their prerogative. If they want to point out that Democrats would be worse, then that’s fine too. But at the very least, can they stop trying to hang their hat on a balanced budget as some sort of accomplishment? It’s not. And continuing to brag about it as if it is— well, it’s embarrassing. Especially when we consider that even Democrats can do it.

On January 11th, we broke the news – while he was on the air with radio talk show host Scott Hennen – that Congressman Kevin Cramer had decided against a run at U.S. Senate. This left many Republicans across the [read more…]

The Forum, Cramer, His New Campaign Manager, & the Liberty Movement

Yesterday, the Forum reported that Congressman Kevin Cramer has hired a new campaign manager in his bid for re-election to the U.S. House. Jared Hendrix of Minot will fill that role. The news was no surprise to us here at [read more…]

DAPL Protest Camp Will be Cleared by the end of Today

About 25-50 protesters are holding out in their NoDAPL camp, just one day past the deadline given by the Army Corps of Engineers. Yesterday, police arrested 10 protesters who refused to leave before the conditions on the ground convinced law [read more…]