As we published earlier, much to the chagrin of those who supported House Bill 1537 — known as the Red Flag Bill — it went down to defeat today in an ironic vote of 17-76. Rep. Rick Becker sat on the Judiciary Committee — who heard the bill and recommended an 11-2 Do Not Pass — and he presented the bill on the floor as its carrier. What ensued as Rep. Becker spoke was an unraveling of all the problematic possibilities (i.e. flaws) in the legislation. There’s so many of them that rather than list them all, it’s best for you to watch his floor speech here.

Rep. Karla Rose Hanson (D – District 44) attempted to counter Becker as she explained why she felt she’d been “called” to introduce HB 1537. Her introductory comments focused on her experience in February of 2016 of receiving a “shelter in place”order after Fargo Police Officer Jason Moszer was gunned down by Marcus Schumacher in her neighborhood. According to Hanson, Schumacher had sought counseling for behavioral health issues in the time leading up to the shooting, but his first available appointment was more than two months later.

In addition to her experience with the shelter in place order, Rep. Hanson also discussed walking into her first grade son’s classroom years earlier as she was “absorbing” the news of the Sandy Hook shooting, where 20 first graders and six adults had been shot and killed. And with that, she stated her intentions with the bill of reducing gun violence and suicides involving firearms.

At least one problem with Hanson’s examples is that there’s no hard evidence this Red Flag Bill would have stopped the death of Officer Moszer, those at Sandy Hook, or Parkland— which she later mentions. But aside from that, there’s still the litany list of problems in the bill that could lead to abuse of others’ gun rights. From who can trigger the removal of guns (i.e. spouse, person living in the same house, former girlfriend or boyfriend, etc.) to what “risk of personal injury to self or others” means (i.e. “threat” of violence, the mere arrest for an accusation of domestic violence, “cruelty towards an animal”, etc.) to the lengthy, tedious, and expensive process of trying to get guns back after they’re confiscated; this bill was simply awful.

According to Rep. Becker, the suicide aspect doesn’t even hold water. While removing guns might reduce the number of gun-related suicides, apparently it has little — if any — affect on the overall suicide rate. In other words, you can take the guns, but if people are going to kill themselves, they’ll find another means of doing it. It’s undoubtedly a sad situation.

This bill was so bad that I think it’s safe to say that the vast majority of people didn’t expect it to get through the House. But have we seen the last of it? I’m not convinced that we have. Yes, the backlash was significant— and even that may be an understatement. My hope was that it would be so severe that there would literally be no contemplation of ever bringing the legislation back again. Yet, with the way the rest of floor debate went, I’m led to believe we may not have seen the end of this.

For example, take the comments of Rep. Austen Schauer (R – District 13)— who also happened to be a co-sponsor on the bill. While he ultimately voted against it, due to the fact that the bill “falls short”, he rose to speak solely for the purpose of complimenting Rep. Hanson for her “courage” in bringing the bill forward and to express appreciation for her doing so.

Rep. Kim Koppelman (R – District 13) was complimentary of both sides of the legislation in his comments on the floor. He too acknowledged the “serious flaws” of the bill, but speculated that perhaps two years from now elements of HB 1537 might become part of addressing some of the issues raised by the intent of the legislation.

There’s no doubt that Representatives Schauer and Koppelman are gentlemen. That’s clearly evident. I too share Rep. Koppelman’s hope that somehow these issues surrounding behavioral health can be addressed. They’re very serious for those suffering with them and for the families of those involved. Having said that, I hope to never see another version of this bill again.

Far too often, we focus on the negative aspects of gun ownership. And in doing so, we lose sight of the positives— which are many. Gun rights were enshrined in our federal and state constitutions for a reason. We must never allow anything to put them at risk, regardless of how courageous or well-intentioned such proposals may be.

The North Dakota House got it right today. Even if the four Republicans who joined Democrats got it wrong in the process. 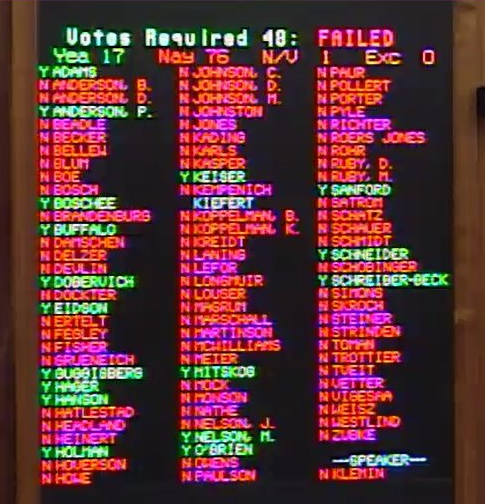 
About T. Arthur Mason 774 Articles
T. Arthur Mason is a native North Dakotan who has spent nearly all of his life in the Peace Garden State. As the third of four children in Western North Dakota, Mason grew to appreciate family and the outdoors. Some of his fondest memories are annual deer hunts with family and friends. In his early teenage years, faith became a central part of T. Arthur Mason's life. He and the majority of his family attend church together on a weekly basis and find this a fulfilling aspect of their lives. Through the influence of his father, T. Arthur Mason became intrigued with politics. As a boy, he attended political events with his father and enjoyed the friendships that resulted as a byproduct of those political associations. As Mason grew older, he became convinced that the quote often attributed to Thomas Jefferson was true, "That government is best which governs least." Today, T. Arthur Mason enjoys time with his wife and children, an occasional hunt, and an increasingly active life on the political scene. This blog is the fulfillment of a dream to design a web site in the realm of politics and to advocate for the principles of Liberty and constitutionally limited government. On behalf of all those that contribute to The Minuteman, we hope you enjoy your time on the site and will share the message with others.

During the 2015 Legislative Session Rep. Rick Becker (R – District 7) proposed House Bill 1084. It simply proposed prohibiting sobriety checkpoints. It failed on a vote of 34-59. He again brought the issue back during the 2017 session— it [read more…]

There’s an Appetite for Eliminating Property Taxes in North Dakota

We recently ran a poll on Facebook that asked a simple question, “If you could vote on a ballot measure to simply ELIMINATE PROPERTY TAX, how would you vote?” The results were overwhelmingly in favor of the idea. Admittedly, this [read more…]

Democrat’s Hit Piece on Rick Becker Based on False Premise

As you’re likely aware, the issue of refugee resettlement has been a hot topic for folks in Burleigh County. In fact, its been so for North Dakota and the nation in general. We published a number of articles on the [read more…]