It’s nice to be #1— usually. Take for example the North Dakota State Bison football program. The Thundering Herd have enjoyed national attention for years now. ESPN has even broadcast games from our beloved state on more than one occasion. Seven National Championships in eight years is nothing short of impressive. It was reported today that President Trump has even invited the team to the White House.

But being #1 isn’t always a good thing. Case in point is North Dakota’s spot at the top of Tax Foundation’s list of State and Local Tax Collections Per Capita— a whopping $9,182. Since Washington, DC isn’t a state, they weren’t given an official ranking as such. But if they were, they’d be #1— which means North Dakota would have sat at the top next to The Swamp. This isn’t anything to be proud of. In fact, we should be ashamed.

Now, even the Tax Foundation attempts to make things sound like they may not be so bad with our ranking:

“Many people are surprised to see North Dakota as the state with the highest collections per capita, but this leads to an important conversation about the strengths and limitations of different ways to measure taxes. Taxes can be evaluated according to their marginal rates, effective rates, tax burdens, collections, and so on. While per capita measurements allow comparison across states with different populations, they do not show who is actually bearing the economic cost of the tax (the tax incidence or tax burden).

In the case of North Dakota, because the state relies so heavily on severance tax revenue from oil extraction—and therefore “exports” a substantial share of its taxes to residents of other states—total tax collections per capita are an especially poor representation of the actual tax burden that falls on North Dakota residents.”

Fair point. But does it honestly make a difference “who is actually bearing the economic cost of the tax”? Or should it be more the fact that such a large amount of taxes are being collected in the first place?

With such a significant amount of taxes being collected here on the Northern Plains, I suppose it should also come at no surprise that we also rank 4th in state & local government spending per capita. Put it all together and we call this “tax and spend”.

Yet, in spite of these types of figures, we’re led by elected officials who largely brand themselves as “Republicans” and dare I say it— “conservative”. If it wasn’t so serious, it might be laughable. But this is other people’s money we’re talking about here. And to be fair, it seems too many of us are content with continuing to elect those who keep the status quo by taking money that is not theirs, to spend on things we don’t need, and to distribute those dollars to people they don’t belong to.

The sign former Texas Congressman Ron Paul kept on his desk, while being a voice in the wilderness in DC, could well be applied to the folks in Bismarck. 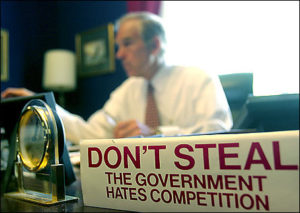 Just today, we had yet another example of an unwillingness by our Republican majority State Legislature to make serious cuts and to reduce or eliminate taxes. Rep. Jeff Hoverson (R – District 3) was the primary sponsor of House Bill 1222, which proposed to eliminate the corporate and personal income tax in the state. It stood no chance. Why? Well, according to the bill carrier, Rep. Jason Dockter (R – District 7), they just can’t give up the $697.4 million cited in the fiscal note that was attached to the bill. Which actually means they really don’t want to reduce spending. The bill was defeated by a vote of 17-71

It’s all about the status quo you know. And that’s nothing to be proud of.

Rep. Andrew Maragos served in the North Dakota Legislature from 1993-2006. He was elected again in 2011 and has been in office since. Yet, it seems the long-time public servant from District 3 may have worn out his welcome with [read more…]

Nearly two years ago, I wrote an article explaining why RINOs (Republicans in Name Only) don’t like the Bastiat Caucus. Oddly enough, I think it might just be more applicable today than when I wrote it then. The Republican political [read more…]

Will the Future of ND Politics See More Independent Candidates?

North Dakota politics can be very interesting. In some respects, I think we’re seeing a shift of sorts on our political landscape when it comes to the two-party system in the state. If true, does this shift mean we’ll see [read more…]