Earlier this month, we published an article about House Bill 1228— otherwise dubbed the “Local Control of Education Bill”. In it I explained that we often hear Republicans give lip service to the mantra of “local control”, but that this legislation put those members of the 2019 Legislative Assembly — who say they support such a thing — in the position of actually having to put their money where their mouths are. After the House Education Committee gave the bill a 12-2 Do Not Pass, it came as no surprise that it was defeated by a vote of 54-38 on Thursday.

The defeat didn’t come without a fight though. Numerous limited-government-minded Republicans stood to defend the bill. I think their names are worth listing here:

The hope in defending HB 1228 was to pass it in the House and resolve constitutional concerns on the Senate side— concerns that the House Education Committee absolutely refused to address through amendment. While the entire debate is worth watching, there’s little question that Rep. Dan Johnston — who happens to sit on the House Education Committee — made the most compelling case for the bill. I highly recommend you give it a listen.

But it was all for naught. In the end, Rep. Mark Owens (R – District 17) — who chairs the House Education Committee — rose in opposition and gave what I can only describe as a nauseating, at times dishonest, and even insulting diatribe. His comments alone are worthy of an article and no doubt contributed to many in the House voting red.

So, what did we learn from the defeat of HB 1228? It’s simple… the majority of the North Dakota House don’t believe in local control of education. This bill was a test. And for those voting against it, they failed miserably. The message is clear— they trust the state, not the locals. 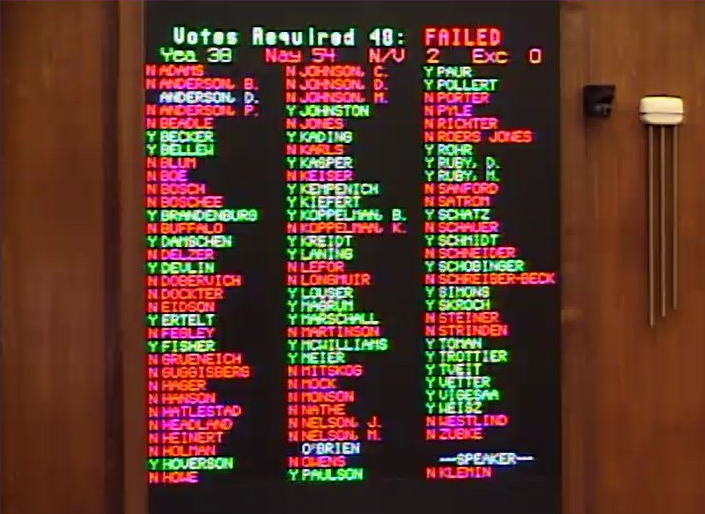 
About T. Arthur Mason 760 Articles
T. Arthur Mason is a native North Dakotan who has spent nearly all of his life in the Peace Garden State. As the third of four children in Western North Dakota, Mason grew to appreciate family and the outdoors. Some of his fondest memories are annual deer hunts with family and friends. In his early teenage years, faith became a central part of T. Arthur Mason's life. He and the majority of his family attend church together on a weekly basis and find this a fulfilling aspect of their lives. Through the influence of his father, T. Arthur Mason became intrigued with politics. As a boy, he attended political events with his father and enjoyed the friendships that resulted as a byproduct of those political associations. As Mason grew older, he became convinced that the quote often attributed to Thomas Jefferson was true, "That government is best which governs least." Today, T. Arthur Mason enjoys time with his wife and children, an occasional hunt, and an increasingly active life on the political scene. This blog is the fulfillment of a dream to design a web site in the realm of politics and to advocate for the principles of Liberty and constitutionally limited government. On behalf of all those that contribute to The Minuteman, we hope you enjoy your time on the site and will share the message with others.

Last month we published an article explaining Rep. Dan Johnston’s (R – District 24) HB 1052. In addition to clarifying the term “parent” as including a child’s legal guardian, the bill would open up a variety of opportunities for homeschool [read more…]

Ending Snow Days & Stripping the State of Power in Education

Two North Dakota lawmakers are proposing a bill in the upcoming 2019 Legislative Session that has the potential to change the way schools across the state handle their snow days. In fact, if passed, the legislation would provide school districts [read more…]

Back in February, I wrote that North Dakota’s Food Freedom Law was under attack again. This time it came in the form of Senate Bill 2269, which was sponsored by former grocer and current State Senator and Assistant Majority Leader [read more…]