Just a week ago, I wrote about the newly organized fear campaign against legalizing recreational marijuana in North Dakota for those 21-years old and older. The opposition comes in the aftermath of Legalize ND having their measure okayed by the Secretary of State’s office for the November 6th ballot. The organized opposition really comes as no surprise.

And it just so happens that earlier this week Liberty ND PAC — a non-profit “formed in April of 2012 to influence state and local elections in the state of North Dakota” — issued a press release in support of Measure 3. At this point, it appears marijuana will not only be the hot topic heading into North Dakota’s elections, but it will be a major battle ground in fighting for votes. In fact, I’d dare say that this issue alone may impact the overall turnout we see on November 6th.

Of particular interest in Liberty ND PAC’s press release was this statement:

“In 2016, voters overwhelmingly approved a measure that legalized medical marijuana in the state, but members of a state legislature that are elected to represent us have usurped the will of the people and stalled the implementation of that law.”

This is something I’ve mentioned in previous articles. The state’s failure to implement Medical Marijuana nearly two years after voters approved of it by an astounding 64% of the vote may prove beneficial for Legalize ND’s quest to get voters to approve recreational use. After all, what message will it send to the legislature and Bismarck’s bureaucrats if the people respond to delays with Medical Marijuana by voting down legalization of recreational?

One of the newest criticisms of Measure 3 is that the state would be required to expunge over 179,000 records, if it passes, at the cost of over $2 million. The best response I’ve seen to this argument comes from Liberty ND PAC board member, Charlene Nelson:

“On the other hand, if M3 doesn’t pass, it will cost $50,000 per year to keep all these non-violent offenders in jail. PLUS loss of good workers and the sales/income tax revenues they would contribute. PLUS their children who need to be on welfare assistance because dad or mom aren’t at home working and taking care of them.

“And our youth like Andrew Sadek won’t be dead. 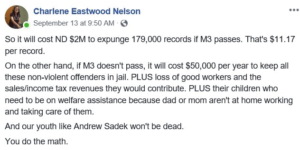 Yet, in spite of the potential benefits to legalization, the newly formed North Dakotans Against the Legalization of Recreational Marijuana – led by former North Dakota Attorney General Bob Wefald – are buckling down in their fear campaign. A recent example of this was on display when Wefald appeared on Point of View with Chris Berg.

The interview speaks for itself. I’ll leave it below for you to watch, but it’s nothing short of embarrassing. Not only does Wefald completely disregard the benefits of legalization cited by Berg in the interview, but his arrogance and ignorance on the issue show a glaring weakness in the organizations campaign against Measure 3. If the opposition truly wants to defeat total legalization, they might consider replacing the 76-year old spokesman and bring an actual argument next time.

By the way, as a side note, it’s interesting to know that Wefald’s wife Susan – a former Public Service Commissioner – is on the sponsoring committee for Measure 1, which is the awful proposal to create an ethics commission in North Dakota.

Today the Department of Justice issued a Memo on Marijuana Enforcement “announcing a return to the rule of law and the rescission of previous guidance documents”. In a nutshell, Attorney General Jeff Sessions has determined the DOJ will no longer [read more…]

Though Medical Marijuana has been legalized in North Dakota, it hasn’t been without controversy and problems. Just two days ago, health officials began gathering public input about proposed rules on implementation of the state’s program– which could be close to a [read more…]

Ever since Measure 3 failed — which would have legalized recreational marijuana in North Dakota — many have looked to a piece of legislation sponsored by Rep. Shannon Roers Jones (R – District 46) as an alternative to legalization. In [read more…]