Tom Campbell is in trouble, and his campaign knows it. The State Senator from District 19 announced his campaign for U.S. Senate last August. At the time, Campbell hoped to use his wealth to flood North Dakota with his advertisements. The purpose, of course, to raise his name recognition in the state and to brand himself as a “Conservative Farmer”. While people undoubtedly became more familiar with his name, the recognition didn’t really seem to translate to overwhelming excitement and support for his candidacy.

Just last month, reports surfaced that while Campbell had “raised” over $1 million for his campaign, about $745,000 of that was his own money. Within two weeks of these reports, Congressman Kevin Cramer reversed his previous decision not to run for U.S. Senate and decided to jump into the race. That decision led Campbell to switch his campaign to the U.S. House race.

Just days after Campbell switched, State Senator Kelly Armstrong (R – District 36) threw his hat into the ring for U.S. House. Not only is Armstrong a State Senator – with a far more conservative record than Campbell – but he had also just resigned from being the NDGOP State Chairman. And as a result of Armstrong’s connections within the party, he said he raised $250,000 in eight days— that doesn’t include the $100,000 of his own money he put in. In other words, what it took Campbell to raise in six months, Armstrong nearly matched in eight days.

One of the problems for the Campbell campaign is that more people are becoming aware of the fact that he’s not really all that conservative. Back in December, we published an article giving examples from his voting record to support this point. Well, apparently someone asked about Campbell’s voting record on his Facebook page yesterday. And according to reports from three different individuals, attempts were made to share our article in response to the question, but it was removed – along with the person’s inquiry about his record – and those individuals who repeatedly tried to share the information on his voting record were blocked from commenting.

Here’s screenshots showing one of the instances of it being removed: 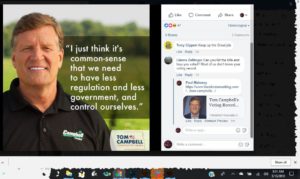 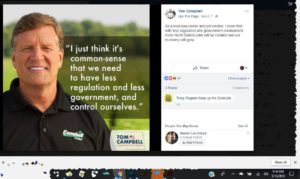 Now, I’ll grant the fact that our article wasn’t favorable to Tom Campbell. But it’s based on his voting record. And furthermore, it provides a link to a more extensive view of his record— including the votes he voted right on. So, why is his campaign afraid to let voters know about it? I’m speculating, but I’m guessing because the overall record doesn’t match the campaign rhetoric of him being a conservative. Heck, we didn’t even mention when he was the only Senate Republican to vote with Democrats in trying to keep the bloated agency known as “BreatheND”.

When a voter asks about a candidate’s record, they should probably get an answer. At the very least, there shouldn’t be an attempt to white wash evidence of what the voting record is. Tom Campbell made those votes. Nobody else did it for him.


About T. Arthur Mason 799 Articles
T. Arthur Mason is a native North Dakotan who has spent nearly all of his life in the Peace Garden State. As the third of four children in Western North Dakota, Mason grew to appreciate family and the outdoors. Some of his fondest memories are annual deer hunts with family and friends. In his early teenage years, faith became a central part of T. Arthur Mason's life. He and the majority of his family attend church together on a weekly basis and find this a fulfilling aspect of their lives. Through the influence of his father, T. Arthur Mason became intrigued with politics. As a boy, he attended political events with his father and enjoyed the friendships that resulted as a byproduct of those political associations. As Mason grew older, he became convinced that the quote often attributed to Thomas Jefferson was true, "That government is best which governs least." Today, T. Arthur Mason enjoys time with his wife and children, an occasional hunt, and an increasingly active life on the political scene. This blog is the fulfillment of a dream to design a web site in the realm of politics and to advocate for the principles of Liberty and constitutionally limited government. On behalf of all those that contribute to The Minuteman, we hope you enjoy your time on the site and will share the message with others.

As North Dakota’s Republicans move closer to the NDGOP State Convention in Grand Forks April 6th – 8th, District 36 State Senator and U.S. House candidate Kelly Armstrong continues to pick up steam for his campaign. According to a letter [read more…]

Treasurer’s Race: Maybe it’s Time to Vote for a Democrat

Readers of The Minuteman know that we backed Rep. Dan Johnston (R – District 24) for Treasurer in June’s Republican primary. Unfortunately, Johnston had two obstacles that ultimately cost him that election— Governor Doug Burgum’s money and Democrats who crossed [read more…]

Why I Support the NDGOP Resolution to Potentially Eliminate Primaries

Last week it finally hit the news that the North Dakota Republican Party will be considering a resolution this week calling for changes to state law in how political parties nominate their candidates for general elections. In a document released [read more…]