Last June, the State of Kentucky added itself to a growing number of states that allow Bible study courses in their public schools. At the time of its signing, by Kentucky Governor Matt Bevin, the ACLU warned that while the bill may not be unconstitutional on its face, it could become such in its implementation. Well, last month, the Kentucky ACLU sent a letter of concern to the Kentucky Department of Education claiming constitutional issues in some of its school districts.

According to screen shots sent to me of a Facebook post from Senator Oley Larsen (R – District 3), it appears the North Dakota Senate’s most conservative member is prepared to propose a similar bill in the 2019 Legislative Session. 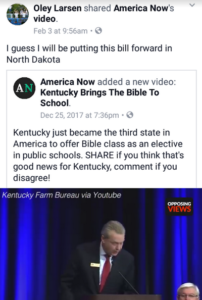 In addition to Larsen’s indication that he will put such a bill forward, Representative Aaron McWilliams (R – District 20) is apparently prepared to co-sponsor the legislation.

In my opinion, there are three key features to the law in Kentucky. First, is that the courses offered in their schools are elective– meaning they aren’t required. Second, they are meant to be taught through the prism of biblical literacy in a social studies curriculum and the role that the text played in American history. Third, it’s left up to school districts whether they want to implement the curriculum or not.

One thing that Senator Larsen and Rep. McWilliams – and any other co-sponsors – will want to be certain of with their legislation is to look to the states that have already implemented it and learn from any challenges they are having. North Dakota and its school districts certainly don’t want to become part of expensive litigation on the matter.

In Kentucky, for example, one of the challenges the ACLU has is that apparently there were no standards to go with the curriculum. If true, then its due to failure on the part of the Kentucky Department of Education, because the legislation required them to develop the standards. Any legislation that is proposed in North Dakota’s 2019 Legislative Session should probably require that standards be in place before classes are taught to help protect against lawsuits.

The larger argument at hand with legislation such as this is the phrase so commonly heard of as “separation of church and state”. It’s interesting to note that such a phrase doesn’t even exist in the U.S. Constitution. As pointed out by author and professor of history, Kevin R.C. Gutzman, in his book titled, “The Politically Incorrect Guide to the Constitution”, the phrase originates from Thomas Jefferson in a letter to the Danbury Baptist Association in 1802:

“Believing with you that religion is a matter which lies solely between Man & his God, that he owes account to none other for his faith or his worship, that the legitimate powers of government reach actions only, & not opinions, I contemplate with sovereign reverence that act of the whole American people which declared that their legislature should ‘make no law respecting an establishment of religion, or prohibiting the free exercise thereof,’ thus building a wall of separation between Church and State.”

Then fast forward and we have twentieth century Supreme Court Justice Hugo Black. Black was a former Ku Klux Klansman who took the lead in writing the Klan’s views on church-state relations into “constitutional law”. Black was a proponent of the Incorporation Doctrine that is so readily accepted today. As noted by Gutzman:

“Black claimed that not only did the First Amendment Establishment Clause apply to state and local governments (which it decidedly did not, in its original understanding, as some states at the time of ratification had established state churches), but that it also erected, in language not found in the Constitution, ‘a wall of separation between church and state…'”

“The First Amendment does not say that there shall be no establishments of religion in the states. And in fact, the first federal Congress pointedly rejected Madison’s proposal to address the question of state establishment of religion.

“The purpose of the First Amendment was to ensure that Congress would neither establish a religion for the United States nor interfere in the religious policy of individual states…” (pgs. 176-177)

Now, please don’t get me wrong. I’m not advocating for state religion. In fact, quite the contrary. Our own North Dakota Constitution prohibits such a thing in Article I, Section 3. But is it possible that a biblical literacy course could be taught in public schools throughout the state without establishing a state religion? I believe it is. But it will require specifics in the legislation. Otherwise, even Christians will fight amongst each other over what is being taught.

Having said all that, the subject still lends to the question of whether it’s appropriate or not? And that’s the ultimate question I believe the legislature will have to face.

Arguments will commence that if this is allowed, will we be willing to permit elective courses on the Koran and other non-Christian texts? Such questions will be hashed out in the debate, but I’m guessing for some there will be no satisfactory answers. And while critics obviously have concerns with such legislation, and how it can be implemented as a matter of teaching and not preaching, its difficult to argue the fact that the Bible played a role in our country’s founding.

Where do I stand on the issue? The idea doesn’t bother me. I believe religion is best taught at home and in church. Yet, there’s no question the Bible has played a vital role in the development of our culture and society in America. To ignore that, is to ignore the reality of our history– which, to be honest, is probably what some critics would like us to do.

So long as school districts have this strictly as an option, and so long as students aren’t required to take it, I don’t have a problem with it. It’s simply not establishing a religion– or even promoting a religion for that matter. It’s simply teaching the historical context of the Bible. You don’t even have to be a believer to acknowledge the reality of that. And in addition to this, I have no problem with World Religion courses either. When taught properly, we have nothing to be afraid of.

But prepare yourselves. Some people are going to lose their minds over this.


About T. Arthur Mason 777 Articles
T. Arthur Mason is a native North Dakotan who has spent nearly all of his life in the Peace Garden State. As the third of four children in Western North Dakota, Mason grew to appreciate family and the outdoors. Some of his fondest memories are annual deer hunts with family and friends. In his early teenage years, faith became a central part of T. Arthur Mason's life. He and the majority of his family attend church together on a weekly basis and find this a fulfilling aspect of their lives. Through the influence of his father, T. Arthur Mason became intrigued with politics. As a boy, he attended political events with his father and enjoyed the friendships that resulted as a byproduct of those political associations. As Mason grew older, he became convinced that the quote often attributed to Thomas Jefferson was true, "That government is best which governs least." Today, T. Arthur Mason enjoys time with his wife and children, an occasional hunt, and an increasingly active life on the political scene. This blog is the fulfillment of a dream to design a web site in the realm of politics and to advocate for the principles of Liberty and constitutionally limited government. On behalf of all those that contribute to The Minuteman, we hope you enjoy your time on the site and will share the message with others.

Earlier this month, I picked up on a House amendment to Senator Oley Larsen’s (R – District 3) Senate Bill 2139 and expressed my concern that the amendment may well sink Senator Larsen’s bill. The original intent of SB 2139 [read more…]

Reminder: Parents Wanting to Opt Kids Out of State Testing Need This Form

With schools beginning their 2017 – 2018 school years across the state, I wanted to take just a brief moment to remind interested parents about the new opt out forms for state testing. I’ve seen a few inquiries floating around [read more…]

Just over two weeks ago, Governor Doug Burgum enjoyed a visit from his old Microsoft friend– billionaire Bill Gates. According to Valley News Live, Burgum and Gates had a “wide-ranging conversation on the important issues facing people in North Dakota [read more…]