The non-profit group known as “North Dakota Open on Sundays” has thrown in the towel on gathering signatures to repeal the state’s Sunday Closing Laws– otherwise known as “Blue Laws”. They announced it on their Facebook page today: 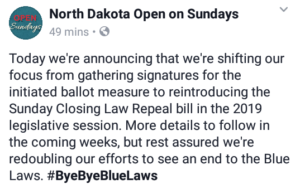 The North Dakota Legislature had the opportunity to repeal the Blue Laws this last legislative session, but House Bill 1163 took some interesting turns before being defeated in the Senate by a vote of 22 – 25.

One supporter sent this explanation from Sponsoring Committee Chairman Brandon Medenwald to his “Team”:

“Today I announced the ND Open on Sundays will stop signature gathering to focus on reintroducing the Sunday Closing Law Repeal Bill in the 2019 session.

“This decision wasn’t come to lightly and the more active of you weighed in throughout the last few months. While we gathered an estimated 5,000 signatures, the volunteer effort required to gather 15,000 in the next 5 months didn’t appear to be there for us. Some of this is due to political campaigns across the state winding up, some of it is due to the Winter scattering our priorities. Given the retirements already announced in the ND Senate (two nay votes are gone and a third is running for US Senate), I think we have an excellent chance to get this passed instead of losing by the slim 22-25 margin.

“I want to be crystal clear: THIS IS FAR FROM OVER.

“In the coming weeks we’ll announce a new direction. The people of North Dakota will be voting on the Blue Law repeal this November, but instead of voting for a measure they will be voting for their representatives.

“Our goal will be to educate and shine a light on candidates and where they stand on the Blue Law. Do they support freedom and flexibility for ND businesses and families, or do they support the 1889 Swiss cheese law that few understand and is unenforceable? We’ll need to let the voters know.

“Thanks for everyone’s hard work. We’ll need more of it this year, so be ready to help. Those of you I’ve gotten to know over the past half a year are passionate about changing things in our state for the better, and we need more of you out there.”

As you can imagine, not everyone that was part of the effort is happy about how things played out. One supporter – who chose to remain anonymous – messaged The Minuteman, expressed their disappointment, and even questioned Medenwald’s intentions:

“I feel like he was using this petition drive to build up steam for his own election. He didn’t want to actually fight for the right for North Dakotan’s to make purchases on Sunday’s before noon. He wanted to get his name out there and control the narrative in his own way.”

These feelings obviously stem – at least in part – from the fact that Medenwald announced his candidacy for North Dakota House in District 41 on Monday— as a Democrat. You can see his campaign website here. In a response to The Minuteman’s request for comment, Medenwald said this:

“From the beginning, we’ve had two tracks to choose from: either gather the signatures for the ballot or try again in the next session being we only lost 22-25 in the state Senate. We opted to collect signatures, which both raised visibility for the issue and gave us that choice. You can’t wait to gather that many signatures in only a few months.

“Given the retirements recently announced in the ND Senate (two nay votes are going away and a third is running for US Senate), I think we have an excellent chance to get this passed.

“While we gathered an estimated 5,000 signatures, the volunteer effort required to gather 15,000 more (to hit our goal) in the next 5 months would be a big lift. Some of this is due to political campaigns across the state winding up and taking volunteers, some of it is due to the Winter scattering people’s priorities.”

Medenwald also made it clear that they are far from done with this issue and that, “In the coming weeks North Dakota Open on Sundays will announce the plan to accomplish the goal of repealing the Blue Laws.”

While the group’s efforts may well find success in the 2019 Legislative Session, it doesn’t change the reality that signature gathering is a labor intensive effort. The fact that supporters of the movement volunteered their time and resources only to have the entire effort scrapped doesn’t reflect well on those leading it.

In a conversation I had with a group of supporters earlier today, one of them expressed the feeling that, “Why should we trust Brandon Medenwald as a member of the Legislature when he couldn’t even carry through on this?” And so it seems that while Medenwald has work ahead of him in repealing the Blue Laws through the Legislative process, rather than the ballot box, he may also have to rebuild some bridges with his supporters in the process. 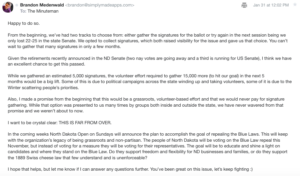 One of the more impassioned bills of the 2019 Legislative Session is set to be heard in the Senate Political Subdivisions Committee tomorrow morning at 8:30am. It is House Bill 1097, which is sponsored by Rep. Shannon Roers Jones (R [read more…]

Is it the Beginning of the End for ND’s Sunday Closing Law?

The process is moving along to end North Dakota’s ban on Sunday morning shopping– otherwise known as a “Blue Law”. Fargo Businessman, Brandon Medenwald, took up the task of organizing a petition drive after the North Dakota Legislature defeated a [read more…]