Early last year an effort began to petition for the recall of Bismarck Mayor Mike Seminary. By May the signatures that had been gathered were all turned in. But Bismarck City Administrator Keith Hunke held a press conference to announce that the recall election for Seminary wouldn’t take place. Hunke cited an insufficient number of signatures due to disqualifications– a decision that was likely illegal.

In the days and weeks following the news conference, organizers of the recall began making Open Record Requests in relation to the issue. As a result, some troubling information surfaced in regards to a list of Bismarck Police Department officers who had signed the petition.

As a matter of context, let’s consider the following timeline:

April 26, 2017 – Chief Donlin writes a letter to Bureau of Criminal Investigation (BCI) Director Dallas Carlson explaining that Hunke asked the BPD to “investigate potential fraudulent activity” regarding the recall. But due to “a perception of impropriety”, he asks the BCI to take over the city’s investigation instead. 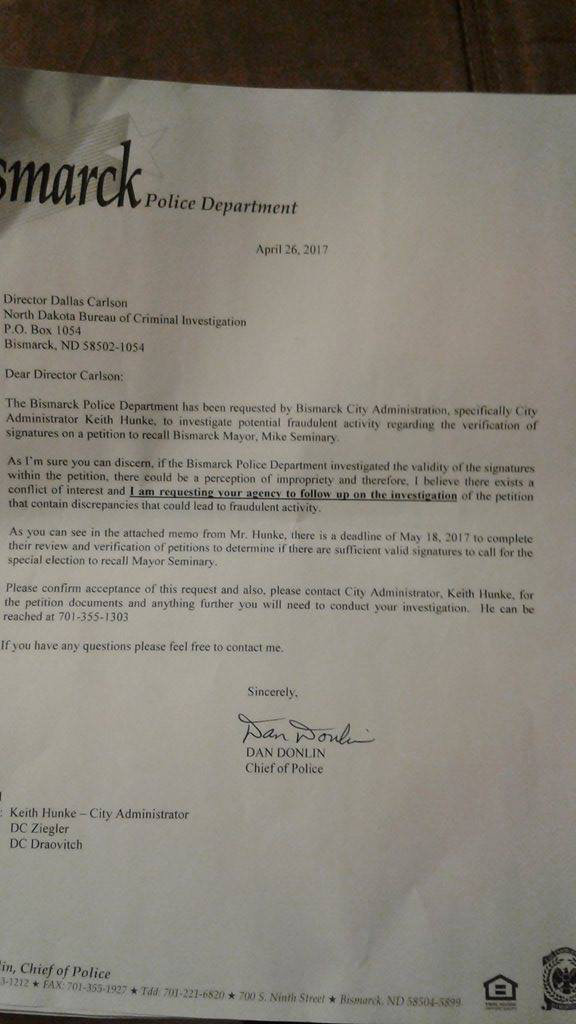 May 11, 2017 – Rob Port of the Say Anything Blog writes an article titled, “If You Signed the Petition to Recall Bismarck Mayor Mike Seminary You May Get a Visit From a Cop“. It’s this article that explains that the City of Bismarck asked BCI to help verify the names on the recall petitions, but points out that such a move could “come off as a little intimidating”. An excellent point on the part of Port.

But that’s not all. There is a key component to Port’s article that may shed some light on Hunke’s request to interview BPD employees. That key is when Port credits recall organizer Paul Maloney as saying “half” the BPD officers signed the petition to recall the mayor. A statement of hyperbole to be sure, but an important one nonetheless.

May 15, 2017 – It is here – just four days after Maloney’s claim in the Say Anything article – that City Administrator Keith Hunke writes his letter to BCI requesting the investigation include interviews of 11 BPD employees that signed the petition.

And apparently this wasn’t the first contact Hunke had with BCI about that request. His letter begins, “Per our conversation…”. Which means they had discussed this before.

Nor was BCI the only recipient of the e-mail request. Chief Dan Donlin was cc’d on it as well. And in a stunning admission, Hunke tells BCI that, “The list of Bismarck Police Department employees can be obtained from Chief Dan Donlin.” 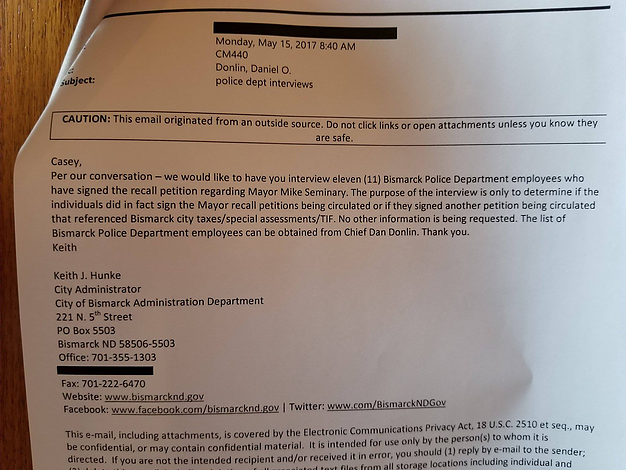 May 15, 2017 – On the same day Hunke requested the involvement of BCI to interview the 11 BPD employees that signed the petition, BCI’s Supervisory Special Agent Tim Erickson responds and denies the request. The reason? Because it “…falls outside of the scope of the investigation.” Erickson goes on to tell Hunke that if they want BCI to reconsider the decision, the City of Bismarck would have to provide “additional information” to suggest the signatures had been forged. And, of course, they weren’t. 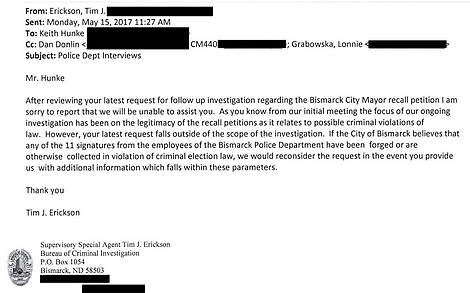 But here’s where it gets interesting. Following the receipt of Agent Erickson’s response, Lieutenant Gary Malo of the Bismarck Police Department’s Investigation Section e-mails Chief Dan Donlin and says, “Really?” Donlin’s response, “Right? Keith’s not pursuing this any further.” 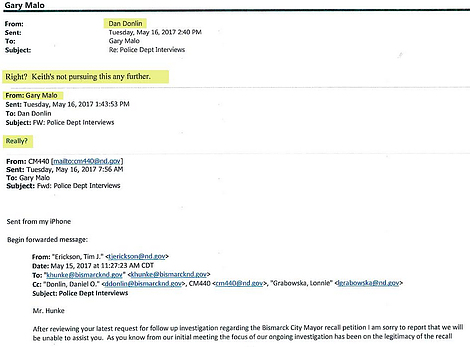 It’s obvious from Donlin’s response that he didn’t necessarily agree with BCI’s decision not to investigate the 11 BPD employee’s who signed the petition. By the way, those 11 employee’s actually turned out to be 9 officers. At least only 9 showed up on the list obtained through an Open Records Request. Who the other two were is unknown at this point– unless Hunke miscounted. You can see the list of officers below: 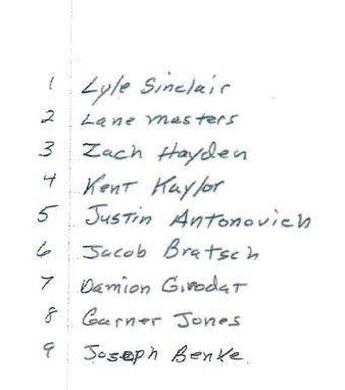 Yet, in a back and forth on social media recently, Chief Donlin denies that the list ever even existed. This all in spite of the fact that the e-mails not only acknowledge that it exists, but that it was Donlin who had it! Here’s the screen shot of Donlin’s denial: 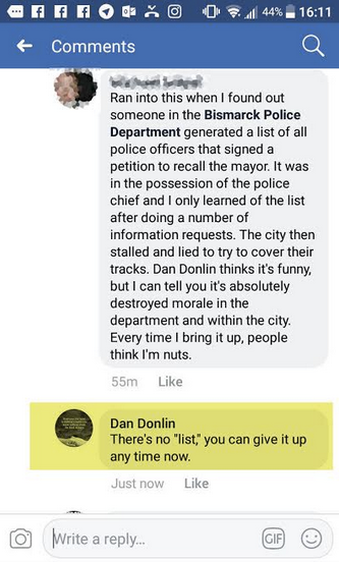 And his denial was after acknowledging in a prior post that the list existed. You can see him admitting it here: 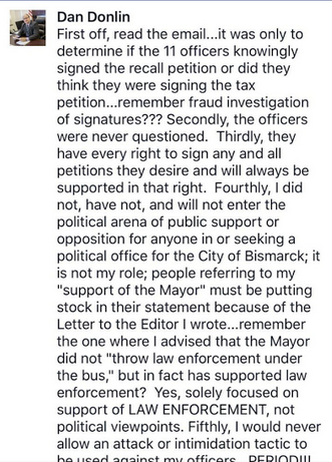 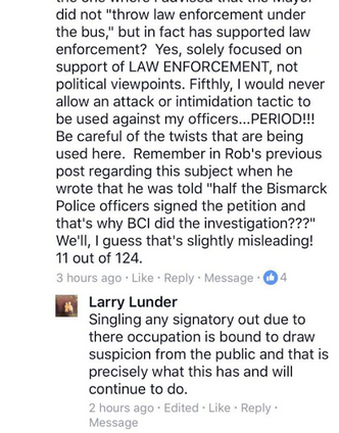 Now, I suppose one could argue that acknowledging 11 officers signed the petition isn’t the same as admitting a list exists. But I’m guessing that if a person is sifting 11 signatures out of the 2,405 that were on the petitions, that they’re writing them down to keep a running total of who they are– after all, they are being singled out. Besides, as previously shown, the documents obtained through Open Records Requests prove the existence of the list.

An interesting side note to Donlin’s post acknowledging the 11 officers that signed the petition is his statement that he would not “… enter the political arena of public support or opposition for anyone in or seeking a political office for the City of Bismarck”. And while he tries to explain away his Letter to the Editor mentioned earlier in the article, I’m not sure it’s sufficient. Especially given the fact that he was attending a NoDAPL event with Mayor Mike Seminary and taking selfie’s with him and two of the protesters.

Last week, on January 11th, Steve Bakken announced his candidacy for Mayor of Bismarck against Mike Seminary. And just five days later Chief Dan Donlin announced his retirement to take place some time between June and September this year. Coincidence?

I suppose this could just be coincidence, but one has to wonder if Donlin sees the writing on the wall of Bakken beating Seminary in a head to head Mayoral race? Does he prefer not to continue as Chief under a new Mayor?

Answers to questions such as these would certainly be speculative. But what’s not speculative is this:

1. Chief Dan Donlin wrote a Letter to the Editor defending Mayor Mike Seminary.
2. The City of Bismarck identified BPD officers who signed the petition.
3. The City of Bismarck requested that BCI single out and interview these officers.
4. City Administrator Keith Hunke specifically stated that the list of officers was in the possesion of Chief Dan Donlin.
5. BCI denied the request.
6. An e-mail exchange shows Chief Dan Donlin apparently disagreed with BCI’s decision.
7. An Open Records Request turned up a list of 9 BPD officers instead of 11.
8. Chief Dan Donlin denied that a list of officers exists– in spite of evidence to the contrary.
9. Steve Bakken announced his candidacy for Mayor on January 11th.
10. After a long weekend following Bakken’s announcement, Chief Dan Donlin announced his retirement on January 16th.

Is it any wonder that some residents of Bismarck have questions or find the entire situation suspicious? Is it really unreasonable to fault someone for having a problem with BPD officers being singled out and a request being made that they be part of an investigation?

After all, was it really about investigating potential “fraudulent activity”? Or was it more about sending a message to officers that signed a petition to recall a mayor that Donlin publicly defended and attended a controversial NoDAPL event with?

I should also point out that BCI never brought any charges against those participating in the recall effort. Aside from the signatures that were invalidated – many of which it could be argued were removed illegally – absolutely no evidence exists of any “fraudulent activity”– none.

It seems we may never have all the answers to these questions – and more – as Chief Dan Donlin rides into the sunset of retirement. Hopefully the citizens of Bismarck have the good sense to send his buddy, Mayor Mike Seminary, down the road with him.

We’ve published enough articles trying to raise awareness to the City of Bismarck, regarding Mayor Mike Seminary’s violation’s of the Corrupt Practices Law, that even I’ll be grateful when the June 12th election is over. Just last week, I wrote [read more…]

Swedish climate activist Greta Thunberg is getting her own documentary with the British Broadcasting Corporation (BBC). I’m guessing you probably didn’t know that. Or, at the very least, perhaps you don’t even care. Most North Dakotan’s likely don’t. But what [read more…]

It’s hard to believe, but a year ago the Dakota Access Pipeline Protests were a hot button topic here in North Dakota and even internationally. Thousands of people flocked to the Standing Rock Indian Reservation. The media was a buzz [read more…]